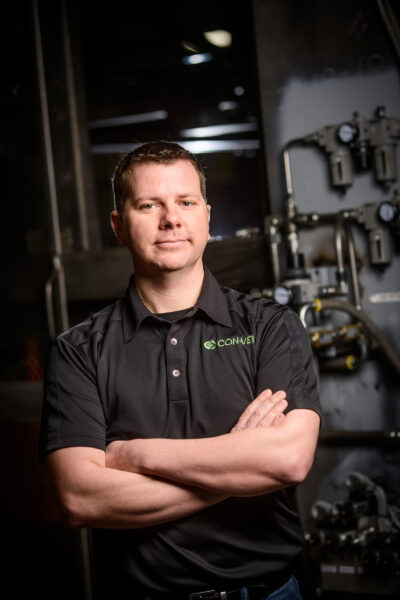 Hensley began as Sales Representative at Con-Vey in 2017 and quickly became a leader in the department. His
experience managing teams for over a decade in the financial
industry as well as a Technical Sales role at another
engineering and manufacturing company prior to Con-Vey led
to his quick ascent to Product Manager.

In the past few years, Hensley has already been involved in numerous projects in the wood- based panel product areas, which have shipped to facilities across the United States, including Washington, South Carolina, Oregon, Texas, North Carolina, and Alabama. This year, Hensley is continuing that growth through his work on many OSB and panel projects for Con-Vey’s customers.

“Brent’s drive to give our customers the best service and equipment for their needs has been an asset not only to our customers but to Con-Vey as well,” said CEO and President, Dave Larecy. “We’re excited for the future of our material handling and panel products segment with Brent at the helm, and know that focusing his efforts on this area will yield continued growth.”