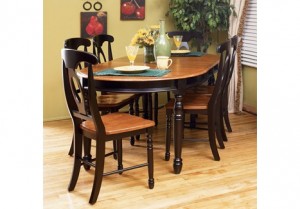 Casual dining resources at the Las Vegas market are seeing continued strong response to a combination of industrial-influenced, contemporary and rustic designs that combine wood, metal, concrete and bluestone materials.
Companies including Whalen furniture, A-America, Jofran, Homleqance and urban styles are among those showcasing mixed media dining at popular price points.
Urban styles has a number of concrete top tables including a round pedestal and 90 inch rectangular table. Retailing around $899 for a table and four chairs, the tables feature wood bases and concrete tops in a charcoal finish.
“Some customers that came in and ordered a container of Strata bought a container of this,” said Rich Serlin, director of sales. “They love it. There is a sea of sameness in dining, and when you come in with something different, people are thirsty for it. They will jump on it.” He added.
In addition to its regular all-wood line, solid wood case goods resource A-America is showcasing about nine inline casual dining sets that feature solid bluestone tops. The groups, shown alongside pieces such as servers that also feature the bluestone tops, are generating orders even though most of the groups, which feature matching occasional pieces, date back to October 2013.