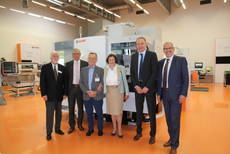 Vollmer has hit 100: With the VPulse 500 wire erosion machine, MAPAL has received the 100th VOLLMER Erosion machine. The two companies can look back on a decade-long partnership and joint development projects relating to the precise machining of PCD tipped (polycrystalline diamond) tools. After all, wire erosion is especially suited to precisely sharpening even the smallest inner radii on mill head systems, end mills or bell-shaped tools. The VPulse 500 will find a new home in the MAPAL Centre of Competence PCD tools in Pforzheim. There it will be used to produce or repair innovative PCD machining tools together with other VOLLMER machines.

Twenty years have passed since the Centre of Competence PCD tools, then called WWS, ordered the first VOLLMER wire erosion machine. Since then, the company has continually developed its diamond tools further, in part thanks to VOLLMER technology and a close partnership with the machine manufacturer.

Together, the two companies made use of the optimistic mood regarding the Topic of PCD at the time and are now pioneers in this area. Due to the shared history, it was a special moment at the Biberach TDZ (Technology and Service Centre) when VOLLMER formally handed over the VPulse 500 wire erosion machine to the MAPAL Centre of Competence. Not just because it was the 100th Erosion machine, but also because the handover involved three people who have represented the partnership between the two companies for decades: In Addition to Werner Stief, founder of WWS and former Managing Director following the takeover by MAPAL, Lothar Reinhardt (Head of Strategic Market Development at the VOLLMER Group) and Sieglinde Vollmer were present at the TDZ. The latter is the trustee of the Sieglinde Vollmer Foundation, a member of the VOLLMER Werke Supervisory Board and the daughter of the company’s founder, Heinrich Vollmer. 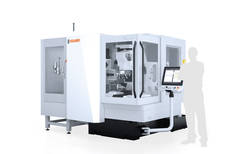 VPulse 500: Erosion technology of the future

Wire erosion is especially suited to PCD tools comprising complex geometries, such as those which MAPAL produces on a daily basis. The Pforzheim site alone manufactures or repairs 110,000 PCD tools a year, with that number rising to around 150,000 worldwide. MAPAL employs VOLLMER wire erosion machines at 13 international sites, including in the USA, China, Japan, Italy and France. The recently handed over VPulse 500 is equipped with a new erosion generator and advanced technology, which makes it possible to not just precisely machine tools, but to also produce any batch size, starting at just one. The modern machine kinematics ensure high profile accuracy in both production and maintenance. “It is not every day that we can hand over the 100th machine to one of our customers, so the handover of the VPulse 500 to MAPAL is a special occasion,” says Dr.-Ing. Stefan Brand, Managing Director of the VOLLMER Group. “We have been closely connected with MAPAL for years, and the customer-supplier relationship has become a close partnership.” Stefan concluded.