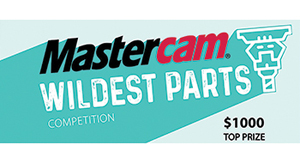 CNC Software, Inc. has announced the winners of the 2017-2018 Wildest Parts competition. The company develops the industry leading CAD/CAM software, Mastercam, and holds the Wildest Parts Competition each year to encourage student interest and participation in manufacturing. The competition is open to students at the secondary and post secondary levels to create parts demonstrating creativity and technical skill using Mastercam.

In the Secondary Division, Caelen DeVall from Hamilton High School submitted a spiral didgeridoo, which is a large wind instrument, typically between one and two meters in length (which is long and hard to transport). Caelen plays the didgeridoo and owns one, but he wanted a more compact instrument to bring around with him. So, his idea was to design a more efficiently spaced didgeridoo that has been wrapped to fit into a smaller space and function as an instrument. He applied Mastercam’s Dynamic OptiRough toolpath for the inside of the instrument and applied both rough and finish toolpaths for the outside.  Grayson Weber from Capital High School placed 2nd with a fly tying kit, and Zane King from Capital High School placed 3rd with his submission of dirt bike pegs.

In the Postsecondary Division, Andrew Nicosia from Erie Community College submitted a vacuum engine. Andrew wanted to challenge himself with a complex machining project for his Advanced CNC class. The engine is designed to run off a butane or propane torch held in front of the small hole in the top of the cylinder. There are 24 different parts in this assembly, and a total of 32 mill programs and 5 lathe programs to create the engine. Andrew learned how to push the machine and cutting tools to their limits in Mastercam and noted that Mastercam took his abilities to a whole other level and showed him what he is truly capable of making. Sam Galliart from Pittsburg State University placed 2nd with a gorilla face injection mold.

Every participant receives a Mastercam t-shirt, and the winning students receive cash awards while their instructors are given shirts, plaques, and other prizes for encouraging their students to enter. A special thank you to the Gene Haas Foundation for generously supporting the Wildest Parts Competition. The Gene Haas Foundation also awards scholarships for continuing education: $1,500 for 1st place, $750 for 2nd place, and $250 for 3rd place.

Even as this year’s winners are announced, it’s time for teachers and students to start thinking about what they will submit for the 2019 Wildest Parts Competition. Submissions must be received before the June 28 deadline.