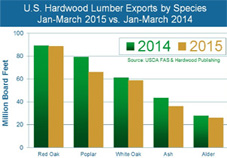 May 2015 was another slow month for North American hardwood lumber exports, according to exporters and buyers in most global markets.

Prices declined across a wide range of species, grades and thickness, and ASH even joined that group. In general, FAS/1F lumber moved better than #1 Common and #2 Common. Hardwood producers were trying to divert more lumber to domestic markets.

Looking back at March 2015 – the latest month with available trade data – U.S hardwood lumber exports total 133 million board feet, which was 7% below March 2014 volume. It was the third time in five months that exports lagged the same month a year earlier; that had only happened three times in the 61 months prior to last November.

Exports were lower to seven of the Top 10 individual markets on the year through March, as were overall shipments to Asia (-9%) and Europe (-15%).
Conversely, exports were up on the year to Latin America (+6%) and the Middle East and Africa (+9%). Year-to-date exports of Poplar, Ash and Hard Maple were each down about 17%, but combined exports of all other species were only off 1%.