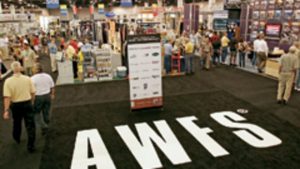 About four dozen fresh talents were honored at AWFS Fair Student Competition. The students accepted Awards at Fresh Wood and Turning to the Future Ceremony. Nicholas Maraldo, a student at Furniture Institute of Massachusetts won the Best of Show award in the 2019 AWFS Fresh Wood Competition after judges reviewed 42 finalist projects of from 25 different high schools and colleges in the U.S. at the 2019 AWFS Fair in Las Vegas, Nevada. Thirty-three Fresh Wood student finalists went home with monetary prizes ranging from $250 to $1,000, along with trophies and software prizes.

Maraldo was awarded an iconic sculpture made by renowned woodworker and artist Judson Beaumont, a reference to his work The Apple Cabinet, which was unveiled during the award ceremony. He received $1,000 and a KCD Software Package. He also received First Place in the Post Secondary Tables category of the competition, which included another $1,000 prize and a Certificate of Merit. The Best of Show award is sponsored by KCD Software. Fair attendees awarded the People’s Choice Award, sponsored by Wagner Meters, and a $750 prize to Cole Daniels at Rolla Technical Institute, for his project Hard Ninety, an originally designed shuffleboard with intricate paneling and accenting, which also won Second Place in the 2019 High School Special Theme Category: Sports and Games.

A new Bravo to Teachers award was given out, by PantoRouter, who presented a well-deserving teacher they selected with a PantoRouter tool: the recipient was Joe Davis from Dale Jackson Career Center in Flower Mound, Texas. Joe’s student Kyle Hassett also won First Place in the High School “Sports and Games” Category for his poker table “The Big Slick.Fresh Wood category sponsors were introduced in 2019, and AWFS thanks the following for their support: Next Wave Automation, Design for Production Category Sponsor; LIGNIA Wood Company Ltd, Seating Category Sponsor; and Northwest Hardwoods, Table Category Sponsor.

AWFS covers project shipping and the majority of travel and hotel costs to bring the students and their teachers to Las Vegas. The biennial event, held as part of AWFS®Fair, attracted 188 entries from schools in the United States. AAW Turning to the Future Students Honored for Talent in TurningMeanwhile, six students received awards and prizes in the American Association of Woodturning (AAW) Turning to the Future Competition. Thanks to the contest sponsors, the two Best of Show winners received Jet 1221SP Midi-Lathe (Woodworker’s Emporium), and category winners received cash prizes of $500 (First Place) and $100 (Second Place) and a tool set from Easy Wood Tools or Woodpeckers. Judging was completed by professional and recognized wood turners Stuart Batty and Christian Brisepierre.

The AWFS Fair brings together the entire home and commercial furnishings industry, including manufacturers and distributors of machinery, hardware, plastics, lumber, construction materials and other suppliers to the furniture, cabinet manufacturers and custom woodworkers. For more information on the AWFS Fair.