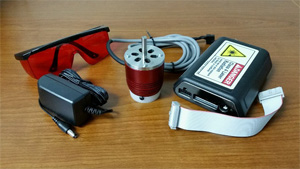 Next Wave Automation has just introduced two, plug-and-play, Solid State Laser Modules. These laser modules are available in either 4 watt or 7 watt models, the Laser Modules have enough power to engrave wood, leather, and acrylics as well as the ability to cut fabric, veneer, and most woods up to 1/8” thick. Each of the new modules can be easily mounted or removed by simply being inserted into the router collet without having to remove the router. Both Solid State Laser Modules are Made in the USA, will include all necessary components and will be available beginning September 2018.

Both the 4 watt and 7 watt modules are fully compatible with all of Next Wave Automation’s CNCs and can be adapted for previous, non-pendant CNC Sharks.

Highlighted features of both new Laser Modules include:
•    Compatible with any Next Wave Automation CNC
•    Powerful enough to engrave almost any species of wood
•    Cuts fabric, veneer, and woods up to 1/8” thick
•    Uses standard Vcarve for programming so there is nothing new to learn
•    Free raster program allows quick conversion of photos to laser art
•    Powerful 4 or 7 watt versions produces better results in less time
•    Meets FDA current laser safety guidelines
•    Made in the USA

Since the introduction of the CNC Shark in 2007, Next Wave Automation has introduced an entire line of Desktop CNC machines and accessories and has won several industry awards for its innovative products. Next Wave Automation products are distributed across the United States by an ever-expanding dealer network.